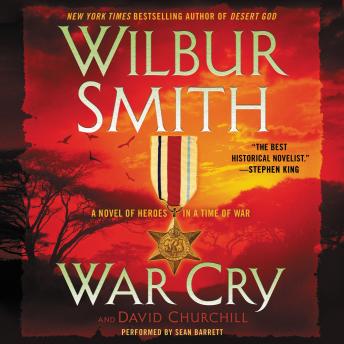 The saga of the legendary Courtney family continues in this fourteenth installment in Wilbur Smith’s bestselling series—the sequel to 2009’s Assegai—a thrilling tale of espionage, adventure, and danger, set in Africa and spanning from the Great War’s end to the dark days of World War II.

As a member of the remarkable Courtney family, Leon Courtney knows how quickly fortunes can be won and lost. Over the course of more than two centuries, generations of his family have risen and fallen with the tides of history. Leon, too, has experienced his own share of triumph and pain. In the wake of his beloved wife’s death, the renowned big-game hunter is raising his young daughter, Saffron, alone in colonial Kenya.

In the 1920s, the continent of Africa is a dangerous place. As Leon attempts to navigate the murky political waters of this most exquisitely beautiful and wildest of lands, his daughter grows into an independent and headstrong young woman bound for a far different life in Britain, as a student at Oxford.

But over the course of more than two decades, spies, traitors, and adventurers will dog their every step. As the fitful years of peace lead to the outbreak of the Second World War—involving Africa once more—Leon and Saffron must fight for their survival . . . and that of their illustrious family.

Wilbur Smith masterfully captures the tensions that will spark a war across continents—and the uncertainty and hopes of a father and daughter caught in its grips—in this engrossing novel that delivers the fast-paced action and vivid history that have made him a living legend.