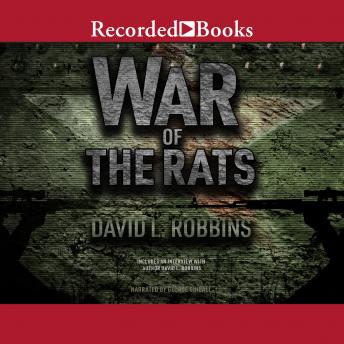 War of the Rats

The battle at Stalingrad during World War II has been called the bloodiest campaign in the history of war. Success was measured in meters, and corpses piled high amidst the charred wreckage of the Russian city. In this grisly setting, David L. Robbins stages an unforgettable contest. On the Russian side is Zaitsev, the Hare, who has been trained since childhood in hunting and tracking. As a sniper, he kills a German with each bullet. Berlin has sent its best marksman, the Headmaster, to find and kill the Hare. The Headmaster's accuracy is phenomenal, and his cunning is legendary. In the ensuing battle of skill and wit between the two deadly soldiers, lives hang on a second's hesitation or haste. Historically accurate, filled with the tension of life-and-death decisions, War of the Rats is a best-seller destined to become a classic war novel. Narrator George Guidall aptly provides voices for the full cast of this epic battle.

Fantastic book, historically not 100%, however, it follows history close enough. I’ve re read this a couple of times and it is very entertaining and enjoyable

An excellent book! As usual much better then the movie.