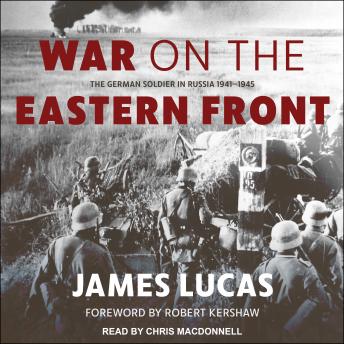 Dawn on Sunday, June 22, 1941 saw the opening onslaughts of Operation Barbarossa as German forces stormed forward into the Soviet Union. Few of them were to survive the five long years of bitter struggle.

A posting to the Eastern Front during the Second World War was rightly regarded with dread by the German soldiers. They were faced by the unremitting hostility of the climate, the people and even, at times, their own leadership. They saw epic battles such as Stalingrad and Kursk, and yet it was a daily war of attrition which ultimately proved fatal for Hitler's ambition and the German military machine.

In this classic account leading military historian James Lucas examines different aspects of the fighting, from war in the trenches to a bicycle-mounted antitank unit fighting against the oncoming Russian hordes. Told through the experiences of the German soldiers who endured these nightmarish years of warfare, War on the Eastern Front is a unique record of this cataclysmic campaign.