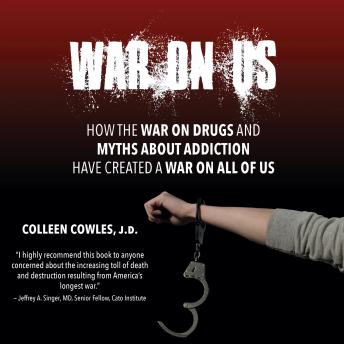 The video of George Floyd's murder at the hands of police shines a light on the life-threatening issues with the U.S. criminal justice system. In 'War On Us: How the War on Drugs and Myths About Addiction Have Created a War on All of Us', attorney and advocate Colleen Cowles uses personal and professional experience to pull back the curtain to expose this failed system. War on Us shows how we've all become victims of this 'War', including those who've never tried an illegal drug. From physicians persecuted for providing health care to their patients to parents grieving the loss of their children to overdose or prison -- we're all affected.. Our health, our families, our assets, our safety and our freedom are at risk - regardless of political party affiliation.. One in three adults in the U.S. now has a criminal record. Patients with severe illnesses or chronic pain are denied access to proven pain medications. Over a trillion in taxpayer dollars in the U.S. alone has 'bought' the highest drug use in the world, the highest overdose rates in the world, and the highest incarceration rates in the world, In 'War on Us', Colleen goes further than concerns about police misconduct, addressing the law and the history that led to devastating results. The book describes the true impact of a 'War' brought about by racism, politics of both parties, economics and myths about addiction. Most importantly, the book outlines specific ways to end this failed 'War' and details steps to replace it with compassionate, effective policy that protects the public as well as individual rights. In WAR ON US, Colleen Cowles raises the alarm and offers practical, proven reforms. There are answers, if we have the will to implement change. It's time to end the War on Drugs - and the war on all of us. This book is the roadmap to do just that.