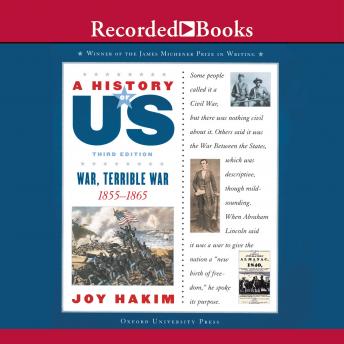 Riveting and moving, War, Terrible War takes us into the heart of the Civil War, from the battle of Manassas to the battle of Gettysburg and on to the South's surrender at Appomattox Court House. Follow the common soldiers in blue and gray as they endure long marches, freezing winter camps, and the bloodiest battles ever fought on American soil. Off the ware fields, War, Terrible War captures the passion and commitment of abolitionists and slave owners alike in their fiery debates throughout the land. With profiles of Abraham Lincoln, Robert E. Lee, Ulysses S. Grant, John Brown, Harriet Tubman, Jefferson Davis, soldiers on both sides, slave owners, abolitionists, average citizens, and others, War, Terrible War is the compelling story of a people affected by the horrors of war during this tragic and dramatic period in A History of US.