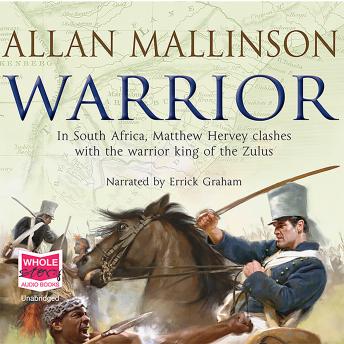 1828: Matthew Hervey of the Sixth Light Dragoons has been urgently recalled to South Africa. The stability of the Cape Colony has been threatened by Xhosa tribesman who have been making incursions across the borders. When Hervey is told by his old friend, Sir Eyre Somervile, that the Zulu warrior king, Shaka, is about to make war on neighbouring tribes, he knows that matters are perilous indeed. Leaving his new wife and young daughter in England, Hervey speeds to his friend's aid. He and Somervile journey to meet the Zulu king, but Shaka's royal kraal is a horrifying place. The sentinels at the gates are corpses, and it is soon apparent that Shaka has slaughtered thousands of his own people. Into this febrile atmosphere ride Hervey, Somervile and their escort of dragoons and mounted rifles. But the sudden death of the Zulu king plunges the region into civil war, with Hervey and his men into terrible danger. Yet worse is to come. Separated from his troop, Hervey must lead Shaka's queen across a hostile and perilous land where sanctuary has never seemed further away.