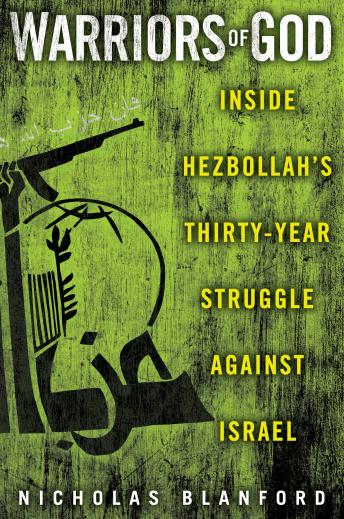 Warriors of God: Inside Hezbollah's Thirty-Year Struggle Against Israel

Hezbollah is the most powerful Islamist group operating in the Middle East today, and no other Western journalist has penetrated as deeply inside this secretive organization as Nicholas Blanford. Now Blanford has written the first comprehensive inside account of Hezbollah and its enduring struggle against Israel. Based on more than a decade and a half of reporting in Lebanon and conversations with Hezbollah’s determined fighters, Blanford reveals their ideology, motivations, and training, as well as new information on military tactics, weapons, and sophisticated electronic warfare and communications systems.

Using exclusive sources and his own dogged investigative skills, Blanford traces Hezbollah’s extraordinary evolution—from a zealous group of raw fighters motivated by Iran’s 1979 Islamic revolution into the most formidable non-state military organization in the world, whose charismatic leader vows to hasten Israel’s destruction. With dramatic eyewitness accounts, including Blanford’s own experiences of the battles, massacres, triumphs, and tragedies that have marked the conflict, the story follows the increasingly successful campaign of resistance that led to Israel’s historic withdrawal from Lebanon in 2000.

Warriors of God shows how Hezbollah won hearts and minds with exhaustive social welfare programs and sophisticated propaganda skills. Blanford traces the group’s secret military build-up since 2000 and reveals the stunning scope of its underground network of tunnels and bunkers, becoming the only journalist to independently discover and explore them. With the Middle East fearful of another, even more destructive war between Lebanon and Israel, Blanford tenaciously pursues Hezbollah’s post-2006 battle plans in the Lebanese mountains, earning him newspaper scoops as well as a terrifying interrogation and a night in jail.

Featuring sixteen years of probing interviews with Hezbollah’s leaders and fighters, Warriors of God is essential to understanding a key player in a region rocked by change and uncertainty.

Warriors of God: Inside Hezbollah's Thirty-Year Struggle Against Israel