Wars That Made the Western World: The Persian Wars, the Peloponnesian War, and the Punic Wars 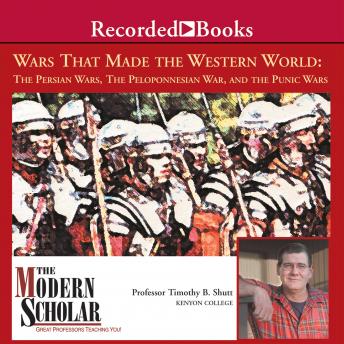 This course addresses three wars fought in antiquity, each of which had-even two thousand years and more later-a decisive effect in shaping our communal sense of who we are, not only in Europe, but throughout the European cultural diaspora, in the Americas, in Oceania, and to some degree, at least, in Asia and Africa as well-wherever, in short, Western values hold. The three wars to be investigated here are (1) the Persian Wars, between a coalition of Greek city-states or 'poleis,' most notably Athens and Sparta, and the Achaemenid Persian empire, the central and decisive portion of which took place between 490 and 479 B.C.E.; (2) the later Peloponnesian War between Athens and her allies and Sparta and hers, 431-404 B.C.E.; and finally (3) the three Punic Wars between Rome and Carthage, which stretched, on and off, for well more than a century, from 264 to 146 B.C.E. Each of these wars helped, in profound and perhaps surprising ways, to shape, even still, our ideals, our identity, and our values.

Wars That Made the Western World: The Persian Wars, the Peloponnesian War, and the Punic Wars