The Warsaw Anagrams: A Novel 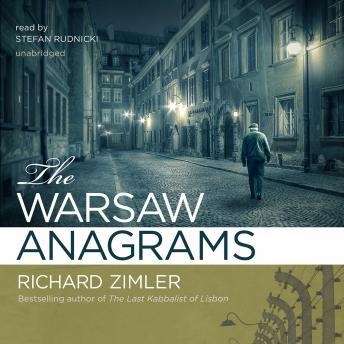 Evil will flourish even when good men fight it.
In this gripping and deeply moving mystery thriller set in the Warsaw ghetto of 1941, an exhausted and elderly psychiatrist named Erik Cohen makes his way home to the Jewish ghetto after being interned in a Nazi labor camp. Yet only one visionary man—Heniek Corben—can see him and hear him. Heniek soon realizes that Cohen has become an ibbur—a spirit. But how and why has he taken this form?
Cohen recounts his disturbing and moving story to Heniek—a story of how a beloved great nephew vanished and later turned up as a mutilated corpse. Cohen’s investigation into this terrible death uncovers other ghetto children that have met similar fates and that the killer might be a Jew. As the story progresses, Heniek begins to believe that Cohen is not the secular Jew he claims to be but may, in fact, be a student of the mystical Kabbalah. When Heniek traces his suspicions, he comes to an astonishing conclusion, one that has consequences for his own identity and life—and perhaps for the reader’s as well.