The Wasp That Brainwashed the Caterpillar: Evolution's Most Unbelievable Solutions to Life's Biggest Problems 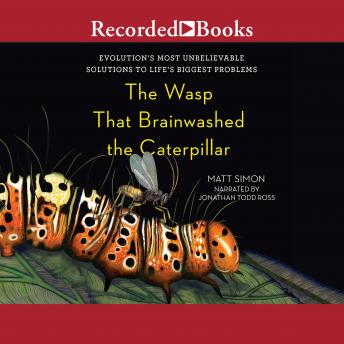 From the man behind the popular Wired series 'Absurd Creature of the Week,' a fun, fascinating collection of unique animals and the unbelievable evolutionary traits they use to survive the most extreme scenarios From Wired columnist Matt Simon, The Wasp that Brainwashed the Caterpillar is an absurdist, comical romp through evolution's weirdest solutions to - appropriately enough - the hazards that evolution itself produces. Each original entry talks about a creature and its amazing adaptation, using Matt's signature blend of scientific accuracy and humor that has made his Wired column and accompanying web show so popular. The creatures themselves are absolutely mind-blowing, with zombie ants mind-controlled by a fungus; beautiful salamanders that can regenerate any part of their bodies including their brains; the mantis shrimp, which fires its club-like appendage so fast that the surrounding water becomes as hot as the surface of the sun; the Antechinus, whose runaway testosterone levels cause them to have so much sex during their three-week mating session that they bleed internally, go blind, and drop dead; and many more.

Wasp That Brainwashed the Caterpillar: Evolution's Most Unbelievable Solutions to Life's Biggest Problems

This title is due for release on October 15, 2017
We'll send you an email as soon as it is available!