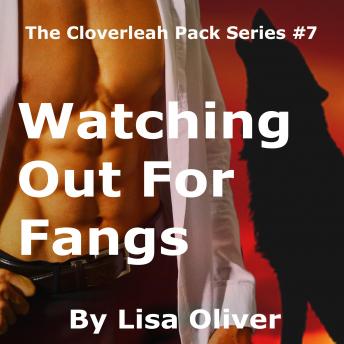 Watching Out For Fangs

Josh moved from the huge San Antonio pack to join the men at Cloverleah looking for a bit more adventure, and the chance to meet his mate. He's quick to adapt to the much smaller pack, and even his status as one of the few beta wolves in a group full of Alphas. A chance visit from the Atlanta coven has him meeting the man he was waiting for. It was just a damn shame he was unconscious at the time.
Vadim D'Arcy should be the Regent of the Atlanta coven, but he gave up his position years before when a personal tragedy had him hiding away in his huge mansion. Forced into a situation where he had to escort a cursed vampire to Cloverleah, he realizes pretty quickly that Josh is his true match. The only problem is, he doesn't want one.
However threats on the pack, and two interfering Fae soon nudge the two men back together. Fighting other wolves, and even vampires is becoming commonplace for the Cloverleah pack. But a dark magic user just might have the last laugh. Can Vadim fight his personal demons long enough to keep his mate safe, and will Josh be there for him when he does? Or will a combined attack from the coven and the pack in Atlanta bring the entire Cloverleah pack to its knees?
Warnings: This is an m/m erotic romance featuring a sweet but staunch beta wolf, an old as sin vampire, and all your other favorites from Cloverleah. HEA and no cliff hangers guaranteed.

Watching Out For Fangs