The Way of Christian Service 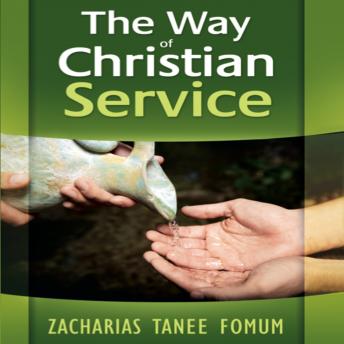 This book is about “The Way of Christian Service.” Serving the Lord is something that is best begun in His immediate presence. When a person has served Him in His immediate presence and satisfied His heart, He may send such a one to go and serve on His behalf. Serving the Lord in His immediate presence consists essentially in worshipping Him. Of the leaders of the church in Antioch it was said,
“While they were worshipping the Lord and fasting, the Holy Spirit said, ‘Set apart for me Barnabas and Saul for the work to which I have called them.’ Then after fasting and praying, they laid their hands on them and sent them off” (Acts 13:2-3).
Barnabas and Saul were sent out to serve from the presence of the Lord to the work to which God had called them. They were ministering in His presence when He sent them away to minister on His behalf. All service of the Lord ought to begin that way.
Serving the Lord is invariably tied to resurrection life. No one can truly serve the Lord without that He, the Lord of all glory, has taken the initiative to bring that one into His service. This is so because those who serve Him must know death with Christ and resurrection with Him. Service is the flow of the life of God, and without resurrection life, there can be no flow.
People can do many things in the Lord’s name, but only that which flows from life will last, and to have the flow of life there must, first of all, be death. A person will minister in proportion to the extent to which he has died and risen with Christ. Those who spare themselves the hard demands of the cross will find that they have also spared themselves the ministry of life. The extent to which a person surrenders himself to death to the world and the flesh, is the extent to which that one will know resurrection life and resurrection ministry.
There can be a work in might and power that is not fully of the Holy Spirit. Samson ministered in power, although he was out of vital fellowship with the Holy God. God demands holiness from all who would serve Him to His satisfaction.
Finally, we want to say that Christian work is acceptable in His sight and satisfies His heart only to the extent to which it is in harmony with His will and under His direction. Every work that is outside His will and direction is not only useless; it is an abomination to Him.
Too many believers today are doing nothing for the Lord. They are shy and withdrawn and lack boldness and a clear sense of direction. Where are those who would dare to step out at His command and take entire villages, towns, provinces, nations, and continents for Him? Where are those who would seek great things for Him?
My prayer is that the Lord of the harvest should use these messages to raise servants and slaves unto His glorious Son, and that such will start in His presence and, as He directs, end in the uttermost parts of the world.
Lord Jesus, ignore the weaknesses and shortcomings both of these messages and of the human messenger, and use them, Lord, for Your glory.

This title is due for release on May 10, 2018
We'll send you an email as soon as it is available!