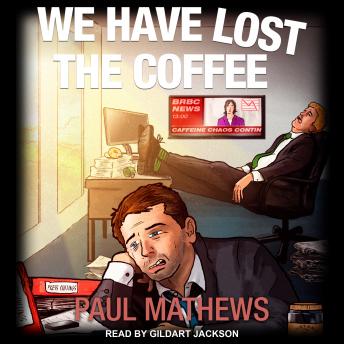 We Have Lost The Coffee

London, 2045. Three months into the Coffee Wars, and Britain's caffeine supplies are at critical levels. Brits are drinking even more tea than usual, keeping a stiff upper lip and praying for an end to it all.

A secret Government coffee stockpile could save the day . . . but then mysteriously disappears overnight.

One man is asked to unravel the missing-coffee mystery. His name is Pond. Howie Pond. And he's in desperate need of a triple espresso. Meanwhile, his journalist wife, Britt, is hunting royal fugitive Emma Windsor on the streets of the capital.

Can Howie save the British Republic from caffeine-starved chaos? Will the runaway royal be found? And just what will desperate coffee drinkers do for their next caffeine fix? Find out in Paul Mathews's latest comedy-thriller set in the Britain of the future.

We Have Lost The Coffee