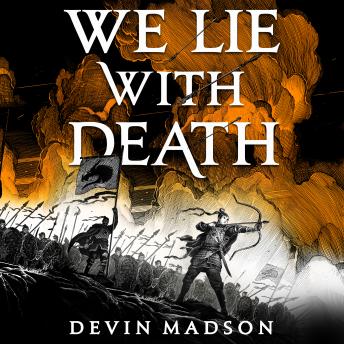 We Lie with Death

War rages as one empire falls and another rises in its place in the action-packed sequel to Devin Madson's bold epic fantasy, We Ride the Storm.
'An exciting new author in fantasy.' -- Mark Lawrence, author of Red Sister
There is no calm after the storm.
In Kisia's conquered north, former empress Miko Ts'ai is more determined than ever to save her empire. Yet, as her hunt for allies grows increasingly desperate, she may learn too late that power lies not in names but in people.
Dishiva e'Jaroven is fiercely loyal to the new Levanti emperor. Only he can lead them, but his next choice will challenge everything she wants to believe about her people's future.
Abandoned by his Second Swords, Rah e'Torin must learn to survive without a herd. But honor dictates he bring his warriors home-a path that could be his salvation or lead to his destruction.
And sold to the Witchdoctor, Cassandra Marius' desperate search for a cure ties her fate inextricably to Empress Hana and her true nature could condemn them both.
We Lie with Death is the thrilling continuation of a bold and brutal epic fantasy series, perfect for readers of Mark Lawrence, John Gwynne and Brian Staveley.
Praise for The Reborn Empire:
'Imaginative world building, a pace that builds perfectly to a heart-pounding finale and captivating characters. Highly recommended.' -- John Gwynne, author of The Faithful and the Fallen
'A complex tale of war, politics, and lust for power.' -- The Guardian
The Reborn EmpireWe Ride the StormWe Lie with Death
For more from Devin Madson, check out:
The Vengeance TrilogyThe Blood of WhisperersThe Gods of ViceThe Grave at Storm's End

We Lie with Death