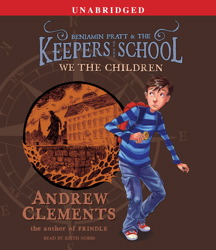 Benjamin Pratt’s school is about to become the site of a new amusement park. It sounds like a dream come true! But lately, Ben has been wondering if he’s going to like an amusement park in the middle of his town—with all the buses and traffic and eight dollar slices of pizza. It’s going to change everything. And, Ben is not so big on all the new changes in his life, like how his dad has moved out and started living in the marina on what used to be the 'family” sailboat. Maybe it would be nice if the school just stayed as it is. He likes the school. Loves it, actually. It’s over 200 years old and sits right on the harbor. The playground has ocean breezes and the classrooms have million dollar views…MILLION DOLLAR views. And after a chance—and final—run-in with the school janitor, Ben starts to discover that these MILLION DOLLAR views have a lot to do with the deal to sell the school property. But, as much as the town wants to believe it, the school does not belong to the local government. It belongs to the CHILDREN and these children have the right to defend it!

Don’t think Ben, his friend Jill (and the tag-along Robert) can ruin a multimillion dollar real estate deal? Then you don’t know the history and the power of the Keepers of the School. A suspenseful six book series, book one, We the Children, starts the battle on land and on sea. It’s a race to keep the school from turning into a ticket booth and these kids are about to discover just how threatening a little knowledge can be.