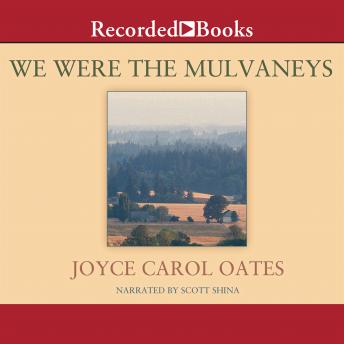 We Were the Mulvaneys

Author of 27 novels, Joyce Carol Oates has won a National Book Award and the PEN/Malamud Award. She has been nominated for the PEN/Faulkner Award and the Pulitzer Prize. Readers around the world marvel at her ability to trace the subtle dynamics at work in the modern American family. Judd is the youngest of the four Mulvaney children--three boys and a girl--who grow up on their parents' lush farm in upstate New York. In his childhood, Judd is swept along by the sheer energy of the Mulvaneys and their wealth of beloved family stories. But now, 30 years old, Judd looks back through his memories to tell the secrets that eventually ripped apart the fabric of his storybook family. Reminiscent of the works of Jane Smiley and Anne Tyler, Oates' novel tells a tale that could be tragic, but is, instead, a ringing affirmation. Narrator Scott Shina's performance perfectly captures the complex relationships within the Mulvaney clan.