The Wedding Vow: A Save the Date Novel: A Billionaire's Demand 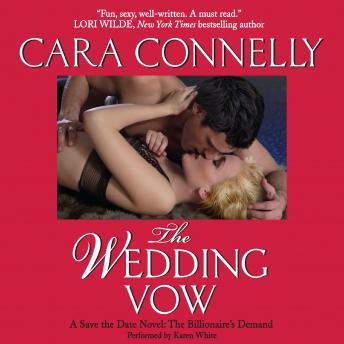 Cara Connelly's second Save the Date novel proves that opposites do attract . . .

The playboy
Sexy billionaire Adam LeCroix has a mission: hunt down the sultry spitfire he blames for his troubles, demand her help, and exact revenge while he's at it. Maddie St. Clair will help him . . . or else.

The prosecutor
Former prosecutor Maddie damn near nailed Adam for stealing, but the lucky bastard walked. Now, five years later, he's back, arrogant as ever, giving her an ultimatum—work for him to collect the insurance money, or she'll never work again.

The problem
Maddie's all about right and wrong. Adam's shades of gray. So when he uncovers the hot body under her hard-ass veneer and she finds he's a thief with a heart, can the law-and-order lawyer and the fast-and-loose felon put their prickly past behind them?

Wedding Vow: A Save the Date Novel: A Billionaire's Demand