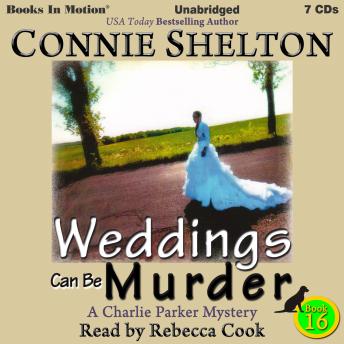 Weddings Can Be Murder

Charlie's brother, Ron, is ready for the happiest day of his life when he will marry long-time girlfriend Victoria Morgan. Charlie will be matron of honor, her husband Drake the best man. But when Charlie stops by the bride's house to pick her up for the ceremony, the place is in disarray and Victoria is missing. And Ron has no proof of where he was the night before, after he and his fiancée had a terrible argument.

Was the fight nothing more than pre-wedding jitters, as Ron claims? Or did the unthinkable happen? Things go from bad to worse when the media jumps on the story and the police treat Ron as a suspect. However, as usual, the answers are not quite so simple.

Weddings Can Be Murder