A Week in December 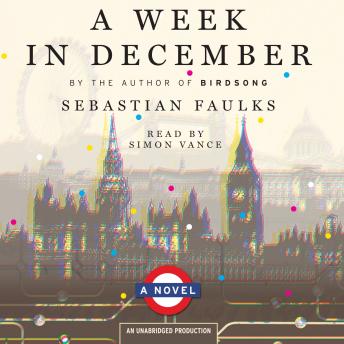 From the author of the bestselling Birdsong comes a powerful novel that melds the moral heft of Dickens and the scrupulous realism of Trollope with the satirical spirit of Tom Wolfe.

London: the week before Christmas, 2007. Over seven days we follow the lives of seven major characters: a hedge fund manager trying to bring off the biggest trade of his career; a professional footballer recently arrived from Poland; a young lawyer with little work and too much time to speculate; a student who has been led astray by Islamist theory; a hack book reviewer; a schoolboy hooked on reality TV and genetically altered pot; and a Tube train driver whose Circle Line train joins these and countless other lives together in a daily loop.

With daring skill and savage humor, A Week in December explores the complex patterns and crossings of modern urban life; as the novel moves to its gripping climax, its characters are forced, one by one, to confront the true nature of the world they—and we all—inhabit.