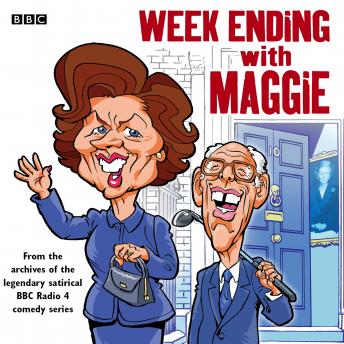 A loyal tribute to 10 glorious years from BBC Radio 4's Week Ending team. From the archives of the legendary satirical radio comedy series Week Ending comes this compilation of satirical and sardonic sketches based on Margaret Thatcher's first 10 years as prime minister.First released on cassette as Ten Years With Maggie, this has now been reissued as a digital download for the first time, on the 30th anniversary of Mrs Thatcher's coming to power.
Written by David Baddiel, Guy Jenkin, Rob Newman, John O'Farrell and many others, it features the vocal talents of Sally Grace, Bill Wallis, David Tate, Jon Glover and Chris Emmett.
Week Ending became the nerve-centre of new writing in British comedy and was an early platform for Britain's major performers. It ran for over 1,100 episodes from 1970 to 1998 and inspired many TV and radio shows.
©2009 BBC Audiobooks Ltd (P)2009 BBC Audio