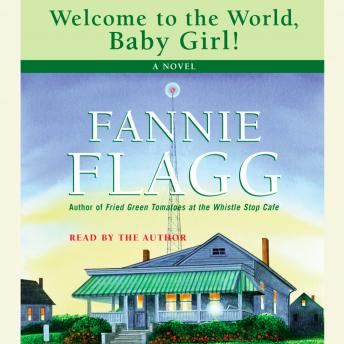 Welcome to the World, Baby Girl: A Novel

Welcome to the World, Baby Girl! is the funny, serious, and compelling new novel by Fannie Flagg, author of the beloved Fried Green Tomatoes at the Whistle Stop Cafe (and prize-winning co-writer of the classic movie).

Once again, Flagg's humor and respect and affection for her characters shine forth. Many inhabit small-town or suburban America. But this time, her heroine is urban: a brainy, beautiful, and ambitious rising star of 1970s television. Dena Nordstrom, pride of the network, is a woman whose future is full of promise, her present rich with complications, and her past marked by mystery.

Among the colorful cast of characters are:

Sookie, of Selma, Alabama, Dena's exuberant college roommate, who is everything that Dena is not; she is thrilled by Dena's success and will do everything short of signing autographs for her; Sookie's a mom, a wife, and a Kappa forever

Dena's cousins, the Warrens, and her aunt Elner, of Elmwood Springs, Missouri, endearing, loyal, talkative, ditsy, and, in their way, wise

Neighbor Dorothy, whose spirit hovers over them all through the radio show that she broadcast from her home in the 1940s

Sidney Capello, pioneer of modern sleaze journalism and privateer of privacy, and Ira Wallace, his partner in tabloid television

Several doctors, all of them taken with--and almost taken in by-Dena

There are others, captivated by a woman who tries to go home again, not knowing where home or love lie.

Welcome to the World, Baby Girl: A Novel

This title is due for release on November 2, 2004
We'll send you an email as soon as it is available!