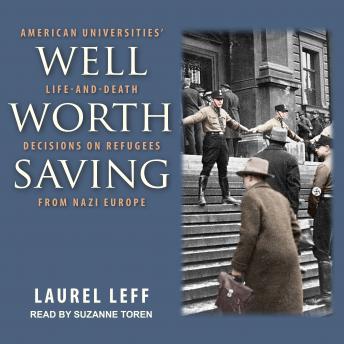 The United States' role in saving Europe's intellectual elite from the Nazis is often told as a tale of triumph, which in many ways it was. America welcomed Albert Einstein and Enrico Fermi, Hannah Arendt and Herbert Marcuse, Rudolf Carnap and Richard Courant, among hundreds of other physicists, philosophers, mathematicians, historians, chemists, and linguists who transformed the American academy. Yet for every scholar who survived and thrived, many, many more did not.

To be hired by an American university, a refugee scholar had to be world-class and well connected, not too old and not too young, not too right and not too left and, most important, not too Jewish. Those who were unable to flee were left to face the horrors of the Holocaust. In this rigorously researched book, Laurel Leff rescues from obscurity scholars who were deemed 'not worth saving' and tells the riveting, full story of the hiring decisions universities made during the Nazi era.