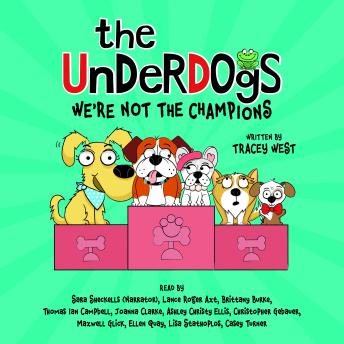 We're Not the Champions (The Underdogs #2)

The second story in this fun series about four dogs who learn that being yourself is muchmore fun than being Best in Show.

Welcome to Barksdale, where all the dogs strive for perfection. Every shopkeeper claims to be the “best groomer” or sell the “bestbiscuits.” And at Barksdale Academy, the pressure is on for one pup to be named Best in Show.Duke’s cousin Coco, a French bulldog from Paris, is visiting for the K-2 loyalty exam. During this exam, the Underdogs and theirclassmates will participate in a field day event against a rival school.Coco is cool, funny, and charming—especially compared to the Underdogs. So when it comes time to choose teams, it’s nosurprise she ends up on Team Awesome instead of with her cousin Duke and his friends.But during the K-2 exam, Coco can’t seem to get anything right! She trips during the six-legged race, and drops everything that’sthrown to her. If Barksdale loses the field day events, everyone—including the Underdogs—will fail their loyalty exam!Can the Underdogs come to Coco’s rescue—and save their school’s reputation?

This title is due for release on March 1, 2022
We'll send you an email as soon as it is available!