What a Gentleman Wants 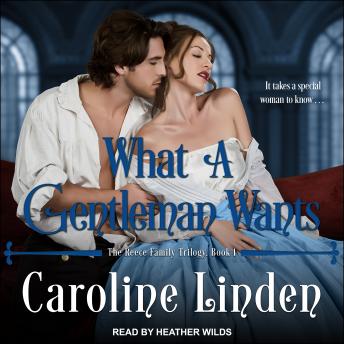 Two strangers are swept into a sizzling, spellbinding world of daring deception and unexpected passion . . .

Marcus Reese, Duke of Exeter, has spent most of his life pulling his twin brother out of trouble. A thank you would suffice; instead, his resentful sibling forges his name to a marriage license and presents him with an unwanted wife. She's a vicar's widow with a mind of her own, and the first person in Marcus's well-ordered life to make him feel . . . completely out of control.

Dire straits have led Hannah to the altar with a gentleman she hardly knows. Played for a fool, she's embarrassed, furious, and worse, married to an equally outraged, exasperating man who unleashes all manner of emotions in her-not to mention unwanted desire. Reluctantly, Hannah agrees to play the wife until he can sort out the mess. But the undeniably attractive Duke unsettles her well-guarded heart-making her want to do so much more than 'act' the role of blissful bride . . .

What a Gentleman Wants