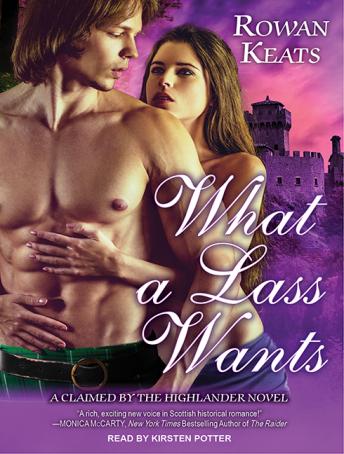 What a Lass Wants

In the Highlands of Scotland, danger and desire can be found anywhere-but finding them may lead to something much more perilous and passionate than anyone can handle.

Lady-in-waiting Caitrina de Montfort is in a terrible bind. With her sister held captive by a henchman of Edward Longshanks, she has been forced to spy on the dowager queen of Scotland. But the resourceful young noblewoman has a plan to set her sister free-until the arrival of a charming but steely-eyed courtier ruins everything.

Bran MacLean has made his living by his wits for most of his life. After stealing a valuable treasure, he evades pursuit by donning a disguise and joining the queen's retinue. All goes well until the lovely Caitrina pilfers his loot and demands his aid in rescuing her sister. But their enemy is ruthless-and they soon find themselves facing a desperate choice between love and survival.Contains mature themes.

What a Lass Wants