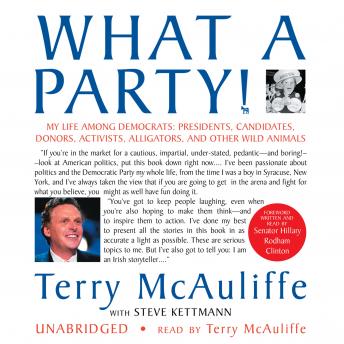 What a Party!: My Life among Democrats: Presidents, Candidates, Donors, Activists, Alligators, and Other Wild Animals

For a generation of Democrats, Terry McAuliffe has been the ultimate political insider: strategist and spokesperson for the party, confidant for the candidates, mediator among party leaders, and without question the most successful fundraiser in political history. Now, McAuliffe’s energetic memoir provides readers with a fly-on-the-wall view, from the front lines to the back rooms where deals are made, strategies are conceived, initiatives launched, and elections are won—or sometimes, lost.

With revealing anecdotes that take you from the Carter-Kennedy primary contest in 1980, through the Clinton years, to the near victories and crushing losses of the 2000 and 2004 presidential campaigns, this is a fascinating, hilarious, and in-your-face look at Congress and Washington, DC, behind the scenes.