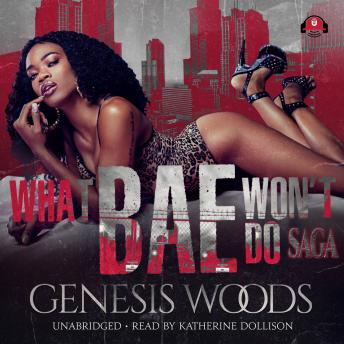 What Bae Won't Do Saga

Get wrapped up in the drama with author Genesis Woods and find out what the next man is willing to do when your bae won't.

What happens when the boy next door doesn't want to be your homeboy anymore? That's the question twenty-five-year-old JaNair Livingston has to ask herself when the sexy and charming Semaj Jones wants to become more than just her neighbor. Any woman in her right mind would be attracted to the tall, dark, talented, and sexy Mr. Jones. So what was JaNair's problem?

Jerome Hayes, JaNair's newest love and current boyfriend, has been sweeping her off of her feet since the day they met. Already feeling that JaNair is the one for him, Jerome plans to do any and everything to keep her in his life; even if it means keeping secrets and lying to the woman he loves. When truths are exposed and lies are revealed, will the shoulder Semaj lends for tears turn into the shoulder JaNair bites into when he shows her pleasures she's never known?

JaNair tries to maintain a relationship with Jerome while her feelings for Semaj seem to keep growing stronger. At the same time, her trifling and crazy cousin Mya is up to her old tricks, trying to make Jerome her man. Will she finally succeed in getting the man who doesn't want her, or will all that lying, backstabbing, and blackmailing pay off?

What Bae Won't Do Saga