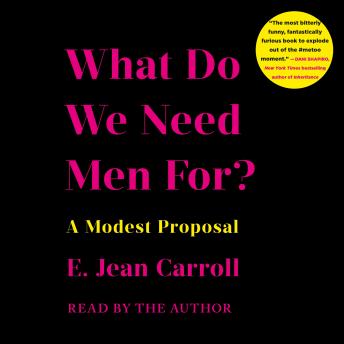 What Do We Need Men For?: A Modest Proposal

'In narrating her own audiobook, Carroll shows her sense of humor with her inflections. Sometimes laugh-out-loud funny but often deeply uncomfortable, Carroll's audiobook never shies away from what she wants to say when she wants to say it.' -- AudioFile Magazine

A Washington Post TEN BOOKS TO READ IN JULY|6 BEST BOOKS TO READ THIS JULY by Town and Country
As seen on the cover of New York Magazine and in the breaking news story about Donald Trump, America's longest running advice columnist goes on the road to speak to women about hideous men and whether we need them.
"Darkly humorous and deadly serious." -Sibbie O'Sullivan, Washington Post
"A compulsively interesting feminist memoir." -Virginia Heffernan, Slate
'Somehow hilarious, in the way that only E. Jean could have written it' -Leigh Haber, Oprah Magazine
"Roving, curious, compassionate, whimsical." -Megan Garber, The Atlantic

When E. Jean Carroll-possibly the liveliest woman in the world and author of the "Ask E. Jean" advice column in Elle Magazine, realized that her eight million readers and question-writers all seemed to have one thing in common-problems caused by men-she hit the road. Crisscrossing the country with her blue-haired poodle, Lewis Carroll, E. Jean stopped in every town named after a woman between Eden, Vermont and Tallulah, Louisiana to ask women the crucial question: What Do We Need Men For?
E. Jean gave her rollicking road trip a sly, stylish turn when she deepened the story, creating a list called "The Most Hideous Men of My Life," and began to reflect on her own sometimes very dark history with the opposite sex. What advice would she have given to her past selves-as Miss Cheerleader USA and Miss Indiana University? Or as the fearless journalist, television host, and eventual advice columnist she became? E. Jean intertwines the stories of the fascinating people she meets on her road trip with her "horrible history with the male sex" (including mafia bosses, media titans, boyfriends, husbands, a serial killer, and a president), creating a decidedly dark yet hopeful, hilarious, and thrilling narrative. Her answer to the question What Do We Need Men For? will shock men and delight women.|Bustle's 27 NEW BOOKS OUT IN JULY 2019 TO GET YOU THROUGH THE SWEATY DAYS OF SUMMER|Los Angeles Times' 7 BUZZWORTHY BOOKS TO READ THIS JULY|Refinery 29's GET YOUR HANDS ON THESE JULY 2019 BOOKS|TOP 5 HOT BOOKS by The National Book Review

What Do We Need Men For?: A Modest Proposal