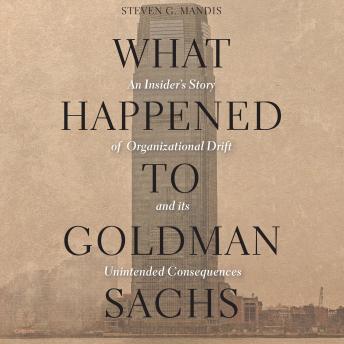 What Happened to Goldman Sachs: An Insider's Story of Organizational Drift and Its Unintended Consequences

In What Happened to Goldman Sachs, Columbia Business School professor and former Sachs executive Steven Mandis charts the evolution of Goldman Sachs from an ethical standard to a legal one and uncovers the forces behind what he calls Goldman's “organizational drift.” Drawing from his firsthand experience; sociological research; analysis of SEC, congressional, and other filings; and a wide array of interviews with former clients, detractors, and current and former partners, Mandis exposes the pressures that forced Goldman to slowly drift away from the very principles on which its reputation was built.Combining insightful analysis with engaging storytelling, Mandis has written an insider's history that offers invaluable perspectives to business leaders interested in understanding and managing organizational drift in their own firms.

What Happened to Goldman Sachs: An Insider's Story of Organizational Drift and Its Unintended Consequences