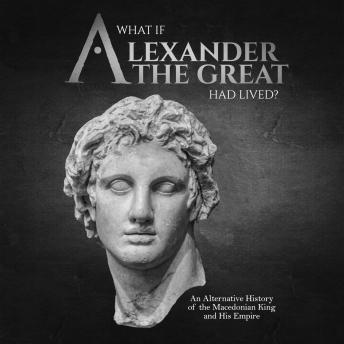 What if Alexander the Great Had Lived? An Alternative History of the Macedonian King and His Empire

In 323 BCE, Alexander the Great was on top of the world. Never a man to sit on his hands or rest upon his laurels, Alexander began planning his future campaigns, which may have included attempts to subdue the Arabian Peninsula or make another incursion into India. But fate had other plans for the young Macedonian king. Alexander died of still unknown causes at the height of his conquests, when he was still in his early 30s. Although his empire was quickly divided, his legacy only grew, and Alexander became the stuff of legends even in his own time. Alexander was responsible for establishing 20 cities in his name across the world, most notably Alexandria in Egypt, and he was directly responsible for spreading Ancient Greek culture as far east as modern day India and other parts of Asia. For the ancient world, Alexander became the emblem of military greatness and accomplishment; it was reported that many of Rome’s greatest leaders, including Pompey the Great, Augustus, and Caesar himself all visited Alexander’s tomb in Alexandria, a mecca of sorts for antiquity’s other leaders.

But what if Alexander had not died in Babylon years before anyone expected to lose him? How would the world have changed had Alexander remained sole king of the Macedonian Empire and lived long enough to designate an heir? Would history eventually have progressed essentially as it did, or would the world look vastly different? What if Alexander the Great Had Lived? An Alternative History of the Macedonian King and His Empire profiles Alexander’s life and examines how events may have gone differently if Alexander survived his last campaign.

What if Alexander the Great Had Lived? An Alternative History of the Macedonian King and His Empire

This title is due for release on April 13, 2020
We'll send you an email as soon as it is available!