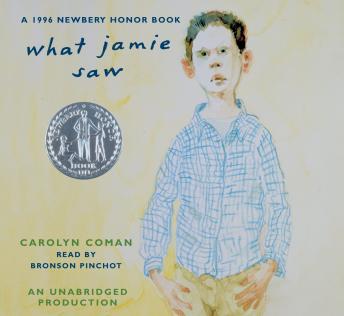 Nin’s okay–Jamie knows that because his mom was there to catch her. And then Jamie and his mom and Nin moved into Earl’s little trailer that loos like a silver toaster up in the hills in the middle of nowhere. Jamie imagines they are the only survivors of some catastrophe, them and Earl, who brings them food and makes sure they’re okay. But then there’s the county fair and Jamie wants to go. And there’s the school and Mrs. Desrochers, Jamie’s teacher, who keeps trying to get close. There isn’t enough money for Christmas presents and the car doesn’t always start and Jamie’s mom is worried lots of the time. Jamie just practices his magic tricks and takes things as they come…until one day Van shows up.

“This chillingly rhythmic opening scene left me breathless and hooked…[this] story could have been bleak…instead, it comes laced with spiritual and literal magic.”–The New York Times Book Review