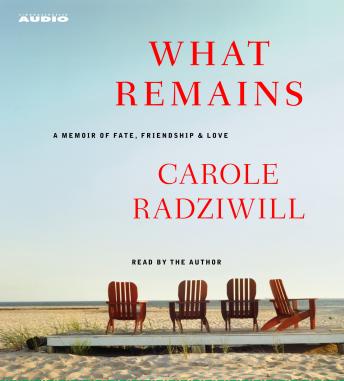 What Remains: A Memoir of Fate, Friendship, and Love

What Remains is a vivid and haunting memoir about a girl from a working-class town who becomes an award-winning television producer and marries a prince, Anthony Radziwill. Carole grew up in a small suburb with a large, eccentric cast of characters. At nineteen, she struck out for New York City to find a different life. Her career at ABC News led her to the refugee camps of Cambodia, to a bunker in Tel Aviv, and to the scene of the Menendez murders. Her marriage led her into the old world of European nobility and the newer world of American aristocracy.

What Remains begins with loss and returns to loss. A small plane plunges into the ocean carrying John F. Kennedy Jr., Anthony’s cousin, and Carolyn Bessette Kennedy, Carole’s closest friend. Three weeks later Anthony dies of cancer. With unflinching honesty and a journalist’s keen eye, Carole Radziwill explores the enduring ties of family, the complexities of marriage, the importance of friendship, and the challenges of self-invention. Beautifully written, What Remains “gets at the essence of what matters,” wrote Oprah Winfrey. “Friendship, compassion, destiny.”

What Remains: A Memoir of Fate, Friendship, and Love

This title is due for release on September 26, 2005
We'll send you an email as soon as it is available!