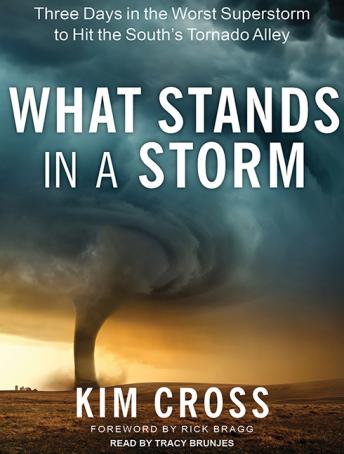 What Stands in a Storm: Three Days in the Worst Superstorm to Hit the South's Tornado Alley

April 27, 2011 marked the climax of a superstorm that saw a record 358 tornadoes rip through twenty-one states in three days, seven hours, and eighteen minutes. It was the deadliest day of the biggest tornado outbreak in recorded history, which saw 348 people killed, entire neighborhoods erased, and $11 billion in damage. But from the terrible destruction emerged everyday heroes, neighbors, and strangers who rescued each other from hell on earth.

With powerful emotion and gripping detail, Kim Cross weaves together the heart-wrenching stories of several characters-including three college students, a celebrity weatherman, and a team of hard-hit rescuers-to create a nail-biting chronicle in the Tornado Alley of America. No, it's not Oklahoma or Kansas; it's Alabama, where there are more tornado fatalities than anywhere in the U.S., where the trees and hills obscure the storms until they're bearing down upon you. For some, it's a story of survival, and for others it's the story of their last hours.

What Stands in a Storm: Three Days in the Worst Superstorm to Hit the South's Tornado Alley