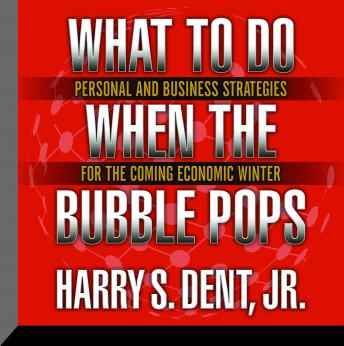 What to Do When the Bubble Pops: Personal and Business Strategies for the Coming Economic Winter

Harry Dent has been predicting for some time that we are about to enter a prolonged downturn, one that will be looked at by historians as a classic economic depression, due to demographic factors

one of the largest generations in history

are leaving the workplace, either due to planned retirement or involuntarily (due to layoffs or not being able to find work), which will have a profound impact on all sectors of our economy. This economic downturn could have been swifter and the pain much less, had the Fed allowed it to happen naturally. However, due to several rounds of Quantitative Easing, essentially pumping 'free money' into the economy, the Fed has not only delayed the inevitable, but they have ensured that the downturn will be much longer and much more severe than it could have been. Harry Dent believes that the Fed can no longer keep the bubble from popping much longer

and when it does pop

every individual will need to be prepared for a period he calls an 'economic winter.' In this program, you'll learn the personal and business strategies that will be essential to protect and preserve your assets, and the few areas of the economy which will still do well during this winter period. This is essential listening for every American citizen.