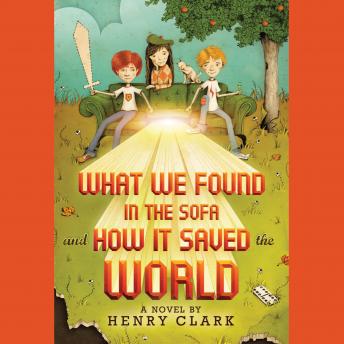 When River, Freak, and Fiona discover a rare zucchini-colored crayon between the cushions of a mysterious sofa at their bus stop, they quickly find themselves in the middle of an evil plot to conquer the world! The plot's mastermind, Edward Disin, is responsible for starting the underground coal seam fire that continually burns just beyond the kids' backyards, a dastardly cover-up for an intergalactic portal that will soon transport an army of invaders to Earth.
Disin's only weakness is his otherworldly obsession with the zucchini crayon--and he knows the kids have it. But with the help of an eccentric neighbor, an artificial intelligence in the form of a double-six domino, a DNA-analyzing tray, two hot air balloons, and a cat named Mucus, three kids from the middle of nowhere might be able to save the planet.
Henry Clark's dazzling debut middle grade novel is a thoroughly original, unabashedly wacky, and surprisingly affecting story about the importance of intelligence and curiosity in a complacent world.