Whatever Happened to the Likely Lads?: Complete BBC Radio Series 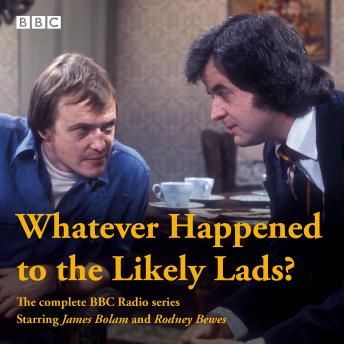 One of the most popular TV comedies of the Seventies, Whatever Happened to the Likely Lads? won a best sitcom BAFTA and attracted an audience of millions before being adapted for radio.

In these 13 episodes, we catch up with Newcastle lads Bob and Terry as they meet by chance after years apart. Now engaged to Thelma, Bob is having pre-wedding nerves; while Terry, demobbed from the Army, is having trouble adjusting to life in civvy street. As they rekindle their friendship, Bob tries to find Terry a date, throws him a surprise party and takes him to the hairdressers to get a new look. In addition, Terry gets some shock news, and helps Bob get ready for his and Thelma’s big day…

Originally lost from the BBC archive, the audio for many of these episodes was recovered by producer Stan Was, the BBC's Archive Treasure Hunt, and a listener to BBC7.

The episodes included are Strangers on a Train, Home is the Hero, Cold Feet, Moving On, I’ll Never Forget Whatshername, Birthday Boy, No Hiding Place, Guess Who’s Coming to Dinner?, Storm in a Tea Chest, The Old Magic, Count Down, Boys’ Night In and End of an Era.

Whatever Happened to the Likely Lads?: Complete BBC Radio Series