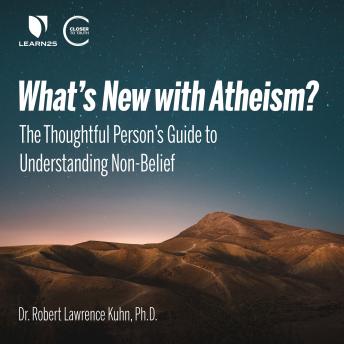 Have you ever wondered what's "new" about New Atheism?

Coined in 2006, the term New Atheism has been used to describe the shared sentiments of prominent 21st-century atheists - perhaps most notably the "Four Horsemen" and talk-show host Bill Maher. In popular perception, the term has also garnered a negative connotation - implying hostility towards religion at large.

Now, in this series of 14 one-on-one interviews, you have the rare opportunity to listen in on conversations with some of the leading actors in New Atheism, including Anthony A. C. Grayling of New College of the Humanities (London) and "Horseman" Daniel Clement Dennett III of Tufts University.

Over the course of the interviews, you'll evaluate some of the most fundamental questions posed by non-believers: Is religion irrational? Does religion have a propensity to lead to violence? Has science superseded the need for God? In other words, have advances in science simply made belief in God unnecessary by accounting for things that mystified our more primitive ancestors?

On the whole, the interviews are light-hearted and jocular. Your host, Dr. Robert Lawrence Kuhn, is practiced in the art of playing devil's advocate and fostering discussion.

By the end of the series, you will gain insight into all of the usual arguments for and against the existence of God. Discover for yourself how New Atheism has fueled a healthy cultural conversation around belief and non-belief.