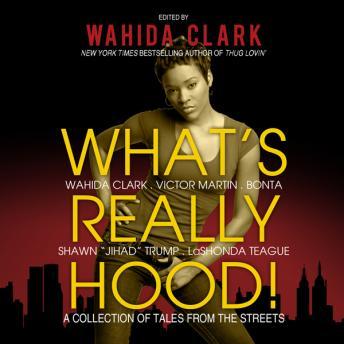 What's Really Hood!: A Collection of Tales from the Streets

Life on the streets take on a whole new meaning in this urban anthology of “hood” tales compiled by New York Times bestselling author Wahida Clark.
“Black Is Blue” by Victor L. Martin delves into the life of a corporate woman who falls in love with a thug and finds out just how easy it is to stray from the straight and narrow.
Eighteen and hungry, Wiz’s only addiction to drugs is the money it makes. But Crystal changes all of that and shows him just how powerful a woman can be, in “The P is Free” by LaShonda Sidberry-Teague.
Bobo, a member of the infamous Eight-Trey street gang, learns that gang life isn’t all it’s cracked up to be as “street wars” take on a whole new meaning in “The Last Laugh” by Bonta.
Shawn “Jihad” Trump tells a story of loyalty, love and honor as The Point Blank Mob is brought to its knees, leaving the crew fighting for their lives and freedom in “All for Nothing.”
And Wahida Clark introduces Nina, a woman tired of being disrespected by men, who takes revenge to the ultimate level in “Makin’ Endz Meet.”

What's Really Hood!: A Collection of Tales from the Streets

This title is due for release on May 24, 2010
We'll send you an email as soon as it is available!