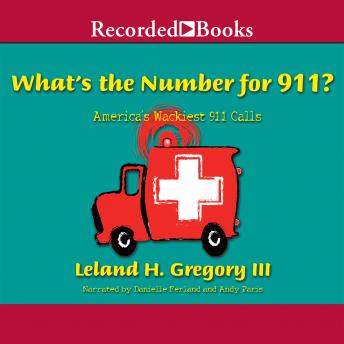 America's 911 system is supposed to be for emergencies only. But some people apparently didn't get the memo, because the following are some of their responses when asked by dispatchers, 'What's your emergency?' - 'Yeah, I want to order a pizza.' - 'I've been standing all day and my feet hurt.' - 'I just swallowed a penny. Am I going to die?' - 'I want an officer to come out and take care of a low-flying aircraft.' - 'When does the Burger King open?' New York Times best-selling author Leland H. Gregory III compiles some of the dumbest and occasionally profane (you've been warned) abuses of the 911 system ever recorded. Danielle Ferland and Andy Paris' amusing narration will have listeners either howling with laughter or scratching their heads in disbelief. Possibly both. Because this book is based on actual 911 calls, there are occasional profane words in the text. The author replaced these words with dashes, and they are bleeped in this recording.