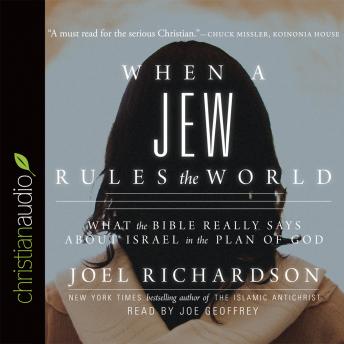 When A Jew Rules the World: What the Bible Really Says about Israel in the Plan of God

There’s only one conclusion you can draw by taking the prophecies of the Bible literally, says New York Times bestselling author Joel Richardson. Someday soon, a Jew named Yeshua – or Jesus, as he’s known in the West – will rule the world from Jerusalem.
In his new book, When a Jew Rules the World, Richardson paints a picture of what that one-thousand-year reign will be like, along the way blow-torching the notion that gentile Christians have "replaced" the Jews and Israel as the people of promise. Richardson lays out the tragic history of anti-Semitism within the church from the very beginning in what may be the most thorough repudiation of what has become known as “Replacement Theology,” or, as Richardson calls it, “Supersessionism.”
Joseph Farah, founder of WND.com, calls When a Jew Rules the World “one of the most important books of our time – a chance for Christians to rediscover their true identity as fellow heirs of promise with the House of Israel, the wild olive branches grafted into the tree of the Abrahamic Covenant. Paul explained how we are grafted into that tree. The tree is not dead. It hasn’t been uprooted. It’s still very much alive, as Richardson so masterfully demonstrates through scripture.”
Chuck Missler praises When a Jew Rules the World, calling the book, “A must read for the serious Christian.”
What exactly is the Abrahamic Covenant, and is it still relevant today?  Has the New Testament done away with the Old Testament?  Is the Church the new and true Israel? What is the Kingdom of God?What lies ahead for the State of Israel?How should gentile believers relate to unbelieving Jews? Richardson answers these questions and more as he carefully walks the reader through the most essential passages of the Bible that must be understood if one desires to combat the growing Christian anti-Semitism. As the rage and resistance of Satan to God’s plans with Israel continues to spread throughout the earth, now is the hour for discerning Christians everywhere to arm themselves with a clear understanding of these profoundly importand and foundational matters.
(Joel Richardson)

When A Jew Rules the World: What the Bible Really Says about Israel in the Plan of God