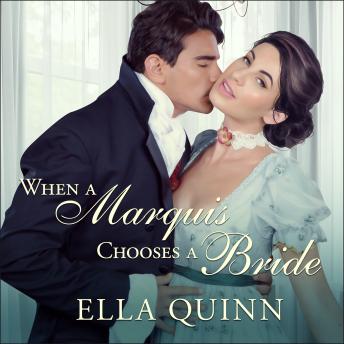 When a Marquis Chooses a Bride

The Dowager Lady Worthington isn't quite sure what to make of country-girl Dorothea Stern. As the granddaughter of the Duke of Bristol, Dotty is schooled in the ways and means of the nobility. But her sharp wit and outspoken nature has everyone in a tizzy. Especially their cousin, Dominic, the Marquis of Merton.

Prematurely stuffy, Dom was raised by his cheerless uncle to be wary of a host of things, including innovation, waltzing, and most perilous of all: true love. Still, there's something about Dotty, beyond her beauty, that Dom cannot resist. But the odds are against him if he intends to win her as his bride. Will he choose loyalty to his family-or risk everything for the one woman he believes is his perfect match?

When a Marquis Chooses a Bride