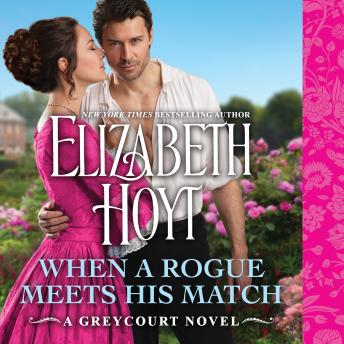 When a Rogue Meets His Match

#2 of The Greycourt Series

Return to New York Times bestselling author Elizabeth Hoyt's signature drama and intrigue, where two enemies will discover if their marriage of convenience can survive -- 'til death do they part.
Ambitious, sly, and lethally intelligent, Gideon Hawthorne has spent his life clawing his way up from the gutter. For the last ten years, he's acted as the Duke of Windemere's fixer, performing the duke's dirty work without question. Now Gideon's ready to quit the duke's service and work solely for himself. But Windermere tempts Gideon with an irresistible offer: one last task for Messalina Greycourt's hand in marriage.
Witty, vivacious Messalina Greycourt has her pick of suitors, so when her uncle demands Messalina marry Mr. Hawthorne, she is appalled. But Gideon offers her a devil's bargain of his own: protection and freedom in exchange for a true marriage. Messalina feigns agreement and plots to escape their deal. Only the more time she spends with Gideon, the more her fierce, loyal husband arouses her affections. But will Gideon's final deed for Windemere destroy the love growing between them?