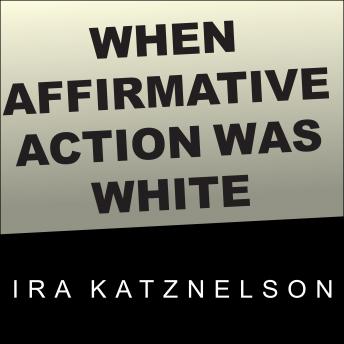 When Affirmative Action Was White: An Untold History of Racial Inequality in Twentieth-Century America

In this 'penetrating new analysis' (New York Times Book Review) Ira Katznelson fundamentally recasts our understanding of twentieth-century American history and demonstrates that all the key programs passed during the New Deal and Fair Deal era of the 1930s and 1940s were created in a deeply discriminatory manner. Through mechanisms designed by Southern Democrats that specifically excluded maids and farm workers, the gap between blacks and whites actually widened despite postwar prosperity. In the words of noted historian Eric Foner, 'Katznelson's incisive book should change the terms of debate about affirmative action, and about the last seventy years of American history.'

When Affirmative Action Was White: An Untold History of Racial Inequality in Twentieth-Century America