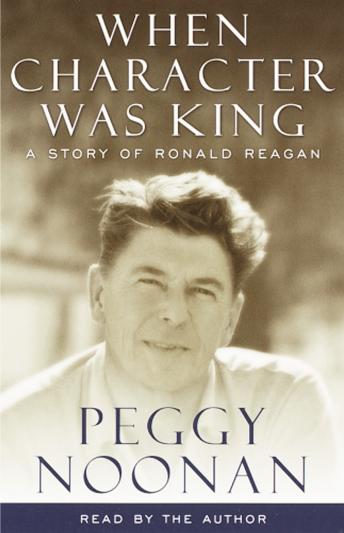 When Character Was King

From the bestselling author of What I Saw at the Revolution comes an elegiac tribute to one of America's most beloved leaders.

It is twenty years—a full generation—since Ronald Reagan first walked into the White House and ignited a revolution. From the beginning, he enjoyed the American people's affection but now, as he approaches the end of his life, he has received what he deserved even more: their deep respect.

What was the wellspring of his greatness? Peggy Noonan, bestselling author of the classic Reagan-era memoir What I Saw at the Revolution, former speechwriter, and now a columnist and contributing editor for The Wall Street Journal, argues that the secret of Reagan's success was no secret at all. It was his character—his courage, his kindness, his persistence, his honesty, and his almost heroic patience in the face of setbacks—that was the most important element of his success.

The one thing a man must bring into the White House with him if he is to succeed, Noonan contends, is a character that people come to recognize as high, sturdy, and reliable.

Noonan, renowned for her special insight into Ronald Reagan's history and personality, brings her own reflections to Reagan to bear in When Character Was King and discloses never-before-told stories from the former president's family, friends, and White House colleagues to reveal the true nature of a man even his opponents now view as a maker of big history.

Marked by incisive wit and elegant prose, When Character Was King will enlighten and move readers.

It's a great book, I really hadn't known much about Ronald Ragean and I believe I have a new found appreciation for him now. this book was a great source for my school book report and research.

Great book about a great man. It is interesting that it wasn't for sale at the Reagan Library when I visited there.

A good read, however it was too short. I felt like I was missing much of the detail that would have been very interesting. I would recommend the unabridged version or read the book.

Enjoyable and well written, particularly if you already are a fan. As Noonan tells us a number of times, she loves Reagan. Skeptics may find her uncritical, worshipping approach frustrating.

OK....I'm not a Republican, but I DID vote for Ronald Reagan back in the 80's...and was a big supporter of his ideas. HOWEVER, you don't have to be a fan of Ronald Reagan to like this book. It is full of information and concepts that are clearly identified through the telling of his life. This is a "must" for those of us looking to climb higher in our careers and life! 5 STARS!

As a HUGE fan of Ronald Reagan I found this account of him very touching and inspiring. Very glad to have listened to it.

Good insights on Regan from a Whitehouse staffer's point-of-view. I loved listening this one - but then again I loved the Gipper.

This was a marvelous book. It was clear, concise and well read. I learned so much about a man that I have long admired but his time in history is a little before my time and now I have the details to go along with the admiration.

Anyone who loves history and people who change it will find it awe inspiring. It was great.

With President Reagan’s passing last year, I felt compelled to learn more about him. This book was really great and I found myself looking forward to my commutes when I listen. Peggy Noonan, who wrote it, also narrated it superbly. Learning about him as a person versus a politician had me repeatedly wishing I had known him. Learning about his contribution to our world touched me and gave me deep admiration for him and Nancy. Check it out!

Peggy Noonan did a wonderful job writing and reading this book. It was a great story to listen to!

This book had me in tears several times. I knew of Reagan's character and his ability to move the American people but this book provided wonderful insight to the person and his faith.

This is an engrossing, very easy to follow biography of Ronald Reagan. Peggy Noonan has a wonderful way with words (as you'd expect, given her speechwriting profession), and grips the reader immediately with her ability to describe events and the emotions surrounding them. Ms. Noonan very obviously has great affection for Reagan. If you're looking for a critical biography, this isn't it. But it is a wonderful tribute to a man who meant so much to so many.

Great book, well written, and lovingly read by the author. I enjoyed immensely.

This title is due for release on November 13, 2001
We'll send you an email as soon as it is available!