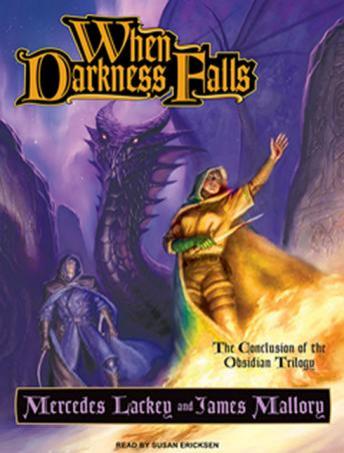 A great working of Wild Magic and High Magic strikes at the heart of the Demon Queen's plots, but the human city, the Golden City of the Bells, falls farther under her sway with each day that passes. And without the City's High Magicians, the Wild Magicians, the Elven Army, and all their allies will surely fall before the onslaught of the Demon Queen's malignant warriors.

But not all hope is lost. The Light's young mages, tempered by war, grow ever more powerful. High Mage Cilarnen learns an ancient secret that can make him, for a brief, white-hot time, the greatest mage in the world-unless it kills him.

Jermayan, the first Elf-Mage in centuries, has linked with the dragon Ancaladar and rediscovered the swift-as-thought powers of Elven magic, which can reshape mountains and summon lightning from clear skies.

Knight-Mage Kellen has molded his troops and the Unicorn Knights into a deadly fighting force. Soon the Elven King and his Commanders put Kellen's magical gifts to their greatest test, in the final battle between the Elves, the humans, and the Demons.