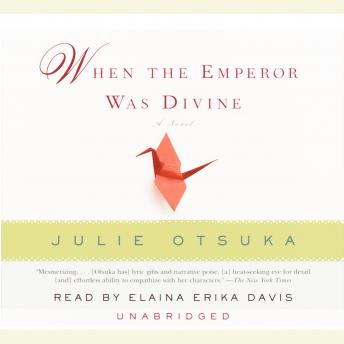 When the Emperor Was Divine

Julie Otsuka’s commanding debut novel paints a portrait of the Japanese internment camps unlike any we have ever seen. With crystalline intensity and precision, Otsuka uses a single family to evoke the deracination—both physical and emotional—of a generation of Japanese Americans. In five chapters, each flawlessly executed from a different point of view—the mother receiving the order to evacuate; the daughter on the long train ride to the camp; the son in the desert encampment; the family’s return to their home; and the bitter release of the father after more than four years in captivity—she has created a small tour de force, a novel of unrelenting economy and suppressed emotion. Spare, intimate, arrestingly understated, When the Emperor Was Divine is a haunting evocation of a family in wartime and an unmistakably resonant lesson for our times. It heralds the arrival of a singularly gifted new novelist.

When the Emperor Was Divine

This title is due for release on October 14, 2003
We'll send you an email as soon as it is available!