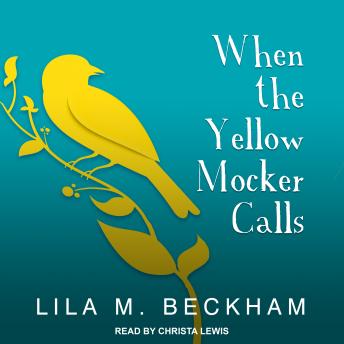 When the Yellow Mocker Calls

In the South Carolina Hills, along the Savannah River Watershed, in the fall of 1829, fourteen-year-old, three-quarter Cherokee, Sahani, whose Christian name is Charity, sets out on a journey with her eighty-three-year-old maternal, white grandfather to Fort Charlotte, for what she thinks is a trip to trade the pelts he has accumulated in order to replenish their supplies. However, Charity soon discovers that her grandfather's objective in making this trip is to get her married off and settled somewhere.

Since her beloved grandmother's passing several months earlier, her grandfather has worried about what would become of Charity should he, too, pass away. And, given his advanced age, he somehow senses that time is near; he does not want to die and leave young Charity alone and desolate. He and his wife reared Charity after her mother and father both died in a yellow fever epidemic when she was three years old.

As they travel to Fort Charlotte, her grandfather tells her that before going to Fort Charlotte they will be making an overnight stop at his friend's house. And, that a year or so earlier, he and his long-time friend, Eli Gulledge, talked about what would happen to Charity should both he and his wife pass away and have arranged for Charity and Eli's son Henry to meet before that time comes to see if they will take a liking to one another.

When Charity, who has never met Eli or his family, hears that, she threatens to act rude in order to make them not like her so that she can go back home with him, but her grandfather tells her that she cannot go back home with him and assures her that if young Henry doesn't take a liking to her, he is sure that some young buck down in Fort Charlotte will be looking for a wife.

Faced with the stark realization that her life is changing and she has no control of that change, many thoughts run through young Charity's mind-she even contemplates running away, but doesn't want to leave her grandfather alone.

When her grandfather suddenly passes away that night at Eli's house, that threat never comes to fruition. Young, Charity is forced to abide by her grandfather's wishes and stay there with Eli's family . . .