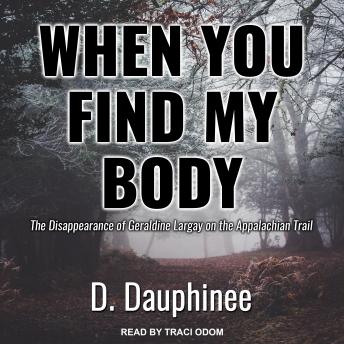 When You Find My Body: The Disappearance of Geraldine Largay on the Appalachian Trail

When Geraldine 'Gerry' Largay first went missing on the Appalachian Trail in remote western Maine in 2013, the people of Maine were wrought with concern. When she was not found, the family, the wardens, and the Navy personnel who searched for her were devastated. The Maine Warden Service continued to follow leads for more than a year. They never completely gave up the search. Two years after her disappearance, her bones and scattered possessions were found by chance by two surveyors. She was on the U.S. Navy's SERE (Survival, Evasion, Resistance, and Escape) School land, about 2,100 feet from the Appalachian Trail.

This book tells the story of events preceding Geraldine Largay's vanishing in July 2013, while hiking the Appalachian Trail in Maine, what caused her to go astray, and the massive search and rescue operation that followed. Her disappearance sparked the largest lost-person search in Maine history, which culminated in her being presumed dead. She was never again seen alive. The author was one of the hundreds of volunteers who searched for her. Gerry's story is one of heartbreak, most assuredly, but is also one of perseverance, determination, and faith. For her family and the searchers, especially the Maine Warden Service, it is also a story of grave sorrow.

When You Find My Body: The Disappearance of Geraldine Largay on the Appalachian Trail