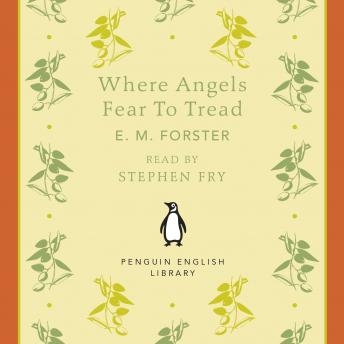 Penguin Classics presents E.M. Forster's Where Angels Fear to Tread, adapted for audio and now available as a digital download as part of the Penguin English Library series. Read by Stephen Fry.

'I had got an idea that everyone here spent their lives in making little sacrifices for objects they didn't care for, to please people they didn't love; that they never learned to be sincere - and, what's as bad, never learned how to enjoy themselves'

E. M. Forster's first novel is a witty comedy of manners that is tinged with tragedy. It tells the story of Lilia Herriton, who proves to be an embarrassment to her late husband's family as, in the small Tuscan town of Monteriano, she begins a relationship with a much younger Italian man - classless, uncouth and highly unsuitable.

A subtle attack on decorous Edwardian values and a humanely sympathetic portrayal of the clash of two cultures, Where Angels Fear to Tread is also a profound exploration of character and virtue.

This title is due for release on May 31, 2012
We'll send you an email as soon as it is available!