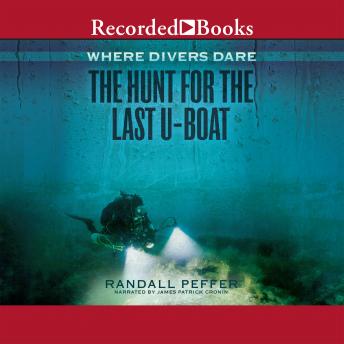 Where Divers Dare: The Hunt for the Last U-Boat

In the tradition of Shadow Divers, the story of the courageous men who dived on the last sunken U-Boat off the Eastern Seaboard. On April 16, 1944, the tanker SS Pan Pennsylvania was torpedud and sunk by the U-550. In return the sub was sent to the bottom by three destroyer escorts which were guarding the convoy. For more than sixty years the location of the u-boat's wreck eluded divers. In 2012, a team found it. This was the last undiscovered U-boat in diveable waters off the Eastern Seaboard of the United States, more than three hundred feet below the surface, nearly one hundred feet deeper than the sub in Shadow Divers. This is the story of their twenty year quest to find the 'Holy Grail' of deep sea diving and the tenacious efforts to dive on this treacherous wreck.

Straight 5 marks! For anyone who was fascinated by Shadow Divers and the Battle for the Atlantic during World War Two, this was like a moth to the flame. The extensive research into the war diary of the U-550, stories of the combatants, details of deep water diving and the technical elements of the search for the wreck, not to mention the fact that the dive on the submarine conjured more questions than it answered....well, this was the kind of audio book you find excuses to drive around the block to finish! Narrator was top notch bringing the story to life for almost fifty chapters....

This title is due for release on June 3, 2016
We'll send you an email as soon as it is available!